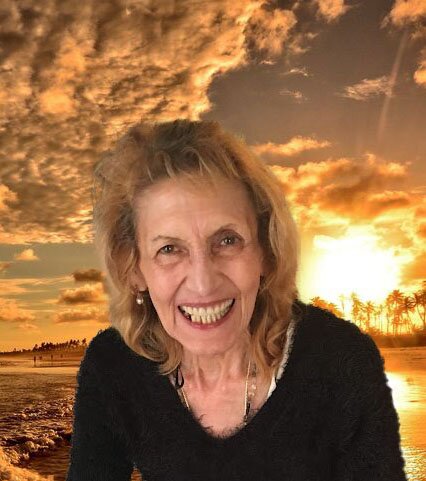 It is with great sadness that we announce the passing of our beloved mother and grandmother. Our "Superwoman", Olga Rosa Guajardo, passed peacefully in her home on August 2, 2022, at the age of 80.

Olga is survived by her son Bryan; daughter Christine; grand son Rico and grand daughters’ Sarah and Victoria. She will be sadly missed and never forgotten.

Olga was born on January 8, 1942, high in the Andes mountains in Chile, South America, to Joseph Guajardo and Olga Rosa Guajardo. She was the eldest child; her younger sister passed away at the very young age of four, and her brother passed away shortly after birth.

She attended a nun’s convent for her schooling up until her high school years in Chile and then ventured out to New York City, Manhattan, where she attended University of New York City. Olga funded her way through university by working at a high-end Jewelers Lucien Piccard, in the daytime and in the evening, she was a Gogo dancer at Studio 54. After completing university, Olga secured an executive position with the United Nations as an international translator.

She would have great stories to tell. One, was one day while working at Lucien Piccard, came walking in, was this the gentleman wearing these big dark sunglasses. The owner of the jewelers discreetly gestured with her eyes for Olga to attend to this gentleman at the showcase.  It was Rock Hudson, he pointed out, a bracelet he wanted to purchase for his girlfriend at the time and had Olga model it for him. Later that same evening, Olga was on stage dancing at Studio 54, and in the front row there sat Frank Sinatra, Mia Farrow, and Rock Hudson. Rock Hudson looked up at her and slid his glasses down his nose as he looked over the top of his glasses… with a look. Didn’t I see you earlier today!

While still working at studio 54 in the evenings is where she met Richard Kennedy, her future partner and father to her son, Bryan. Richard, from Hamilton, Ontario Canada, invited Olga to return with him where their son Bryan was born in 1968. Their relationship dissolved shortly thereafter. Olga and Richard went their separate ways.

Olga then started to attend night school in Hamilton, Ontario adding to her education skillsets, where she met a new future husband and had another child, a daughter, Christine, in 1970.

After a short few years in Canada, she secured the position as the executive assistant to the president of Steelco, heading up the Nanticoke division at Lake Erie.

Her marriage became very turbulent and traumatic. She finally left the marriage, left everything behind, didn’t take a single cent from her ex-husband.  She purchased a new house, all new furniture, raising both children all on her own, working for the steel company in the daytime and catering evenings and weekends.

The Nanticoke division was terminated after 10 years. Olga then ventured in new direction, and with her contacts from United Nations and the steel industry. Olga led a team of engineers and architects to build a community for families coming to Canada from South America. She was appointed as the president and treasurer of the Los Andes Co-op housing community in Stoney Creek.

She was a very hard-working, woman, dedicated, professional and had the utmost attention to detail in everything she did, meticulous! Olga was a very well mannered and a classy lady, very respectful, kind and courteous towards others.

Olga always put everyone first before her; she was the most selfless and generous person. She truly sacrificed all she had for her children and grand children. She loved all her children fiercely! She would sit and listen attentively to her children with no interruption, was always curious, and showed a deep interest in their life events.

Olga had two quotes she always referenced, “No-Pain, No-Gain”, and “It’s Better to Prevent than Cure”

She was my rock, my confidant, my mentor, and best friend. I love you, mom, with all I have. See you on the other side. Until then, your loving Son, Bryan.

Share Your Memory of
Olga
Upload Your Memory View All Memories
Be the first to upload a memory!
Share A Memory