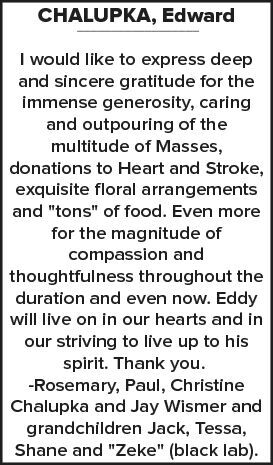 It is with profound sadness that we announce the passing of Ed Chalupka.  Dear son of the late Joseph and Mary (Danko) Chalupka and brother of the dearly missed Alex Chalupka.  Beloved husband of Rosemary (Malloy) for 51 years, loving father of Christine (Jay) and Paul, Grandpa to Jack, Tessa and Shane Wismer.  Brother to Irene (and the late Nick Woodworth), Richard and Louise Chalupka, brother-in-law to Irene Chalupka.  Also to Rachel and Doug Lawson. Nephew, uncle and cousin in a large and loving extended family, Eddy will be missed by many.  Ed was born in Peterborough and raised in Hamilton.  He enjoyed many childhood summers with cousins at his grandparents’ farm in Smithville.  Eddy attended the University of North Carolina at Chapel Hill on a football scholarship.  After graduating he went on to play for his hometown Hamilton Tiger Cats. He was a member of the 1972 Grey Cup team.  Ed was involved with the CFLPA for many years. From 1987-1992 he was the Managing Director of the CFL Hall of Fame. Ed was the VP of Football Operations for the CFL from 1992 until his retirement in 2005.  Ed was a dedicated member of the Knights of Columbus, St. Francis Xavier Parish.  He enjoyed hunting and fishing with friends and family especially the annual trip to Lake Temagami.  The family would like to extend their sincere gratitude to the outstanding medical staff at CICU Juravinski Hospital. Their kindness, care and compassion was truly appreciated.  Friends will be received at the Donald V. Brown Funeral Home, 36 Lake Avenue Drive, Stoney Creek on Wednesday, November 20, 2019 from 2-4 and 7-9 p.m. Vigil Prayers 8:30 p.m.  Funeral Mass will be celebrated at St. Francis Xavier Church 304 Hwy. # 8, Stoney Creek on Thursday, November 21, 2019 at 9 a.m. Interment Mountview Gardens, Stoney Creek.  In lieu of flowers the family would ask you to consider a donation to the Heart and Stroke Foundation.  Online condolences may be sent at www.donaldvbrown.ca