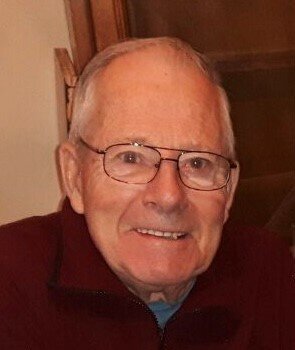 It is with great sadness that we announce the passing of Ronald Carmen Kingsbury.  Surrounded by his loving family, Ronald passed away at the Hamilton General Hospital on August 28, 2022.

Beloved husband to Gloria Kingsbury (nee Jefferies) for over 65 years.

He was predeceased by his son Jody (1974) and his daughter Suzanne and grand-son Dustin (both 1994).

Ron was born on June 4th, 1935 in Bright, Ontario to Bertie and Mabel Kingsbury.  Ron loved growing up in Oxford County, with his 4 brothers and 3 sisters.  On January 12, 1957,  Ron and Gloria were married and moved to Woodstock, Ontario.  They relocated many times while raising their large family.   From Woodstock to Brussels, Brussels to Wingham, Wingham to Tilsonburg, Tilsonburg to Courtland, and finally from Courtland to the Hamilton Area.

Although he had many jobs throughout his 87 years, his true joy was preaching about God's Kingdom as one of Jehovah's Witnesses.  He faithfully continued in this ministry right up until his death.  Like his family, Ron had faith in the Bible's promise of a future on a paradise earth, where death will be no more and those in the memorial tombs will come out. (Revelation  21:3,4 ; Matthew 5:28,29).  This hope now brings his family great comfort.

He was laid to rest in the Brussels Cemetery on September 1, 2022.  His memorial service will take place at the Kingdom Hall of Jehovah's Witnesses on Saturday, September 17th, 2022 at 2 p.m.  It is located at 277 Stone Church Road West, Hamilton Ontario. (Rear Building)

Share Your Memory of
Ronald
Upload Your Memory View All Memories
Be the first to upload a memory!
Share A Memory