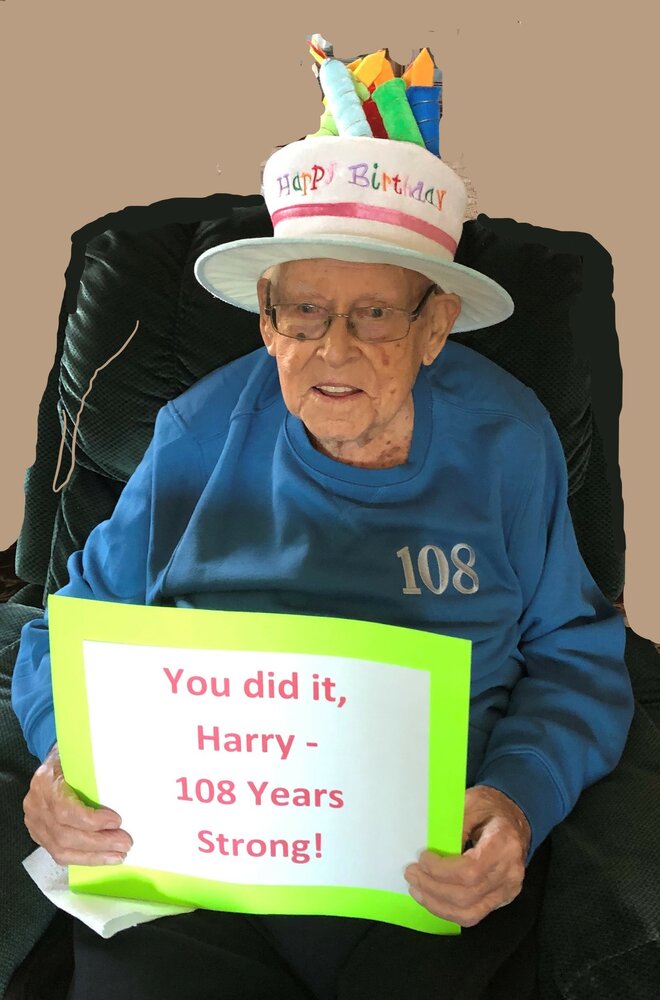 Born January 7, 1914, in Chester England. After a long and healthy life, Harry slipped away on April 6, 2022, at the age of 108. He was a Stelco retiree enjoying his many years of retirement. Harry drove his wife Edna on their last trip to Florida when he was 99 and decided not to renew his license at the age of 103. Harry was predeceased by his first wife of 59 years, Ethel (Snelling) and their only son Alan Aldridge, and by his second wife of 18 years, Edna (Skinner). He often remarked he was thankful for his “Second” family: Lorraine Forsyth (Bob deceased), Bruce and Joan Thomson, Jim and Lori Skinner, Janelle Knowles (Paul deceased), Pete and Peg Skinner and their families. The loyalty and support of Janelle and Paul on life’s major decisions over many years, gave them contentment. He will be missed by all of us. The most adored and appreciated in Harry’s life for the past 5 years was his caregiver who loved him dearly- Gloria Wilson, the bond they shared was beyond words. Harry will also be missed by his long-time devoted friend Glen Larlee who affectionately called him “Dad” and by his niece Wendy Jones and her family of England. Friends will be received at the Donald V. Brown Funeral Home, 36 Lake Avenue Drive, Stoney Creek, on Tuesday, April 12th, from 12 noon until the Funeral Service in the Funeral Home Chapel at 1 pm. Interment Mountview Gardens, Stoney Creek. Online condolences and notes of sympathy may be left at www.donaldvbrown.ca

Share Your Memory of
Harry
Upload Your Memory View All Memories
Be the first to upload a memory!
Share A Memory