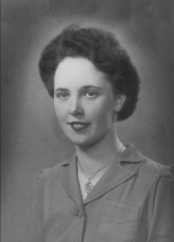 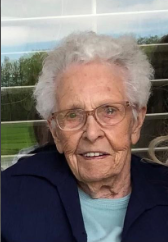 Confident that she had issued her final instructions and advice, Margaret was able to leave us peacefully at home comforted by her family.

Predeceased by her husband Reg (1919-1998), she is survived by her children, Nadine (Bill), Ian (Karen) and Brian (Brenda), nine grandchildren, six great-grandchildren, her sister Roberta and extended family in Canada and the UK.

Margaret claimed she was not a modern woman. However, at a young age she left her home in Scotland to serve in the Royal Air Force during WWII. She spent her 23rd birthday on a ship with Reg travelling to Canada, a country she had never been. She learned construction skills when they built their home in Stoney Creek where they lived until the end of their lives. She read the Hamilton Spectator cover to cover every day forbidding anyone to touch the paper until she was finished. Later she depended on a regular schedule of television news outlets. In her 80s she learned telephone banking. In her 90s Margaret could navigate an iPad to keep up with the family news, would ask one of us to “Google” something for her and occasionally make an online purchase or donation. She often said the family photos and e-mails made her feel connected with them, wherever they were in the world. Even in her final days, checking multiple times was an essential part of her routine.

Without a doubt, family came first for Margaret. She and Reg sacrificed a great deal to give their children a loving home, good food and life opportunities they never had for themselves. Out of necessity she sewed and knitted holding herself to high standards. Her finished projects were often complex and near perfect. Providing good quality food was a lifelong theme. The annual garden was tended with love and the harvest fed the family in season and through winters. She always made sure we were well supplied with the best produce, baked and pantry goods even when she had to direct others to obtain or prepare it for her. When her children were young, Margaret was a leader with the Girl Guides, learned the rules of hockey to better enjoy the hours she spent in arenas and tried her best to understand the appeal of stock car racing. For many years she was primary caregiver for Reg. It was unexpected but Margaret tackled this often-stressful responsibility without a second thought. She never missed acknowledging life events for her immediate or extended family. Just last week, she sorted her inventory of greeting cards for most of the new year, signed and had the cards for January mailed or ready to go.

Her generous nature also extended to her charitable giving. Throughout her life she gave what she could in time and donations to many organizations.

She was a proud Canadian citizen. She was a census taker in the days when they went door to door and worked in various positions for many elections. She made it clear to all, that voting was a right and responsibility not to be ignored.

Margaret achieved her goals of giving the best life and legacy possible to her family and contributing what she could to community and country. She always took the high road. The void she leaves is enormous.

The family would like to sincerely thank Dr. Barbara Bielecki and her staff, especially Cindy; Marcy and Sara (Able Living); Alexa, RN (VON) and Mary Ellen (Hamilton LHIN) for their care and compassion, both for Margaret and us.

Share Your Memory of
Margaret
Upload Your Memory View All Memories
Be the first to upload a memory!
Share A Memory