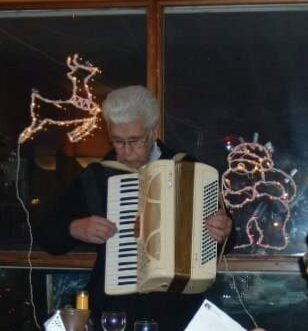 Passed away peacefully, at Hamilton General Hospital, on Sunday, October 10, 2021 at the age of 91. Predeceased by his wife Jackie. Cherished father of Rob of Hamilton, Carrie (Doug) and their daughter Audrey of Hamilton, and Terry and his family of British Columbia. Dear brother of Eleanor Sanders of Hamilton. Survived by his nieces and nephew, and by his cousins in Hamilton and out West. Ted was most happy when music was involved. He had the ability to play instruments by ear, including the accordion, drums, piano, guitar, organ, ukulele, and saxophone. He played with his own orchestra performing at many dances and weddings. He loved to fiddle and fix different items. He also had a love for the Hamilton Tiger-Cats and the Toronto Maple Leafs, never missing a game. Ted was a former employee of Westinghouse and enjoyed bowling, camping, and going for ice cream with friends and family. He will also be remembered for his love of dogs. Ted's family would like to thank the numerous caregivers, nurses and doctors at Juravinski, St. Joseph, and General Hospitals. Gratitude goes out to the amazing staff for their love and laughter at both New Village Retirement Residence and at Arbour Creek Long-Term Care Centre. Cremation has taken place. Friends will be received at the Donald V. Brown Funeral Home, 36 Lake Avenue Drive, Stoney Creek on Sunday, October 17, 2021 from 2-5 p.m. A private family interment will be held. Notes of sympathy and condolence may be left at www.donaldvbrown.ca

Share Your Memory of
Ted
Upload Your Memory View All Memories
Be the first to upload a memory!