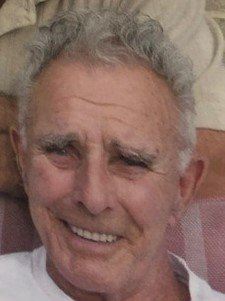 Our dad, Sam Sklair, passed away on June 12, 2021.  Born in Glasgow Scotland on August 17, 1922 to Mary (nee Kane) and Samuel Sr. Husband of the late Anne Sklair (2008); loved father to Irene (Jack), David (Karen), Debbie (Scott); adored Papa to his grandchildren Becky (Emily), David (Bill), Nathan (Jess), Lauren, Melissa (Angelo), and Maegan (George) and beloved GeePee to Quinn.  Loved brother of the late Andrew, the late John, the late Eddie and Mary. Dad signed up with the 10th Royal Hussars, Royal Armoured Corps, in Scotland – lying about his age – so he could join his older brother Andrew in action.  His younger brothers, Eddie and John joined the Navy prompting a Glasgow newspaper to publish a story about all 4 brothers. Dad was known throughout Stoney Creek for his daily walks that took him to downtown Hamilton, to the pier in Burlington and all points in between.  We once suggested that Dad get a dog to keep him company on his walks; he responded quite sincerely, “no, a dog couldn’t keep up with me”. He was a quintessential Scotsman.  When he was in his mid-80s, he needed to replace the battery in his car.  When asked why he didn’t get a more expensive battery, he said he had no intention of buying a battery that might outlive him.  He never saw the humour in his words but we all enjoyed it. Dad moved to Lakeview Retirement Centre when he was 97 years old.  He was proud of the fact that he lived independently (well, with a little help from his kids!) for so long.  The family wishes to thank Lakeview and all its staff for the love and kindness shown to our father.  Dad had many angels caring for him on his final walk.  The future of health care is in good hands with the nurses, PSWs, PTs, OTs, SWs and doctors we met.  Our eternal thanks to the angels at HGH 8S, Juravinski E2 and M2, and St. Joseph’s Villa, 2E. Cremation has taken place. The Funeral Service will be held at the Donald V. Brown Funeral Home, 36 Lake Avenue Drive, Stoney Creek, on Tuesday, June 22nd at 1 p.m. and will be livestreamed on the Funeral Home Facebook page.  Interment to follow in Fifty Cemetery, Winona. Due to Covid-19 restrictions, in accordance with the Bereavement Authority of Ontario facial mask/coverings are required.  Please visit the Funeral Home website to register your attendance for the Funeral Service due to limited space availability. Online condolences and notes of sympathy may be left at www.donaldvbrown.ca

Godspeed Dad.  You are missed already.

To register for the Funeral Service, please CLICK HERE.

Share Your Memory of
Samuel
Upload Your Memory View All Memories
Be the first to upload a memory!
Share A Memory