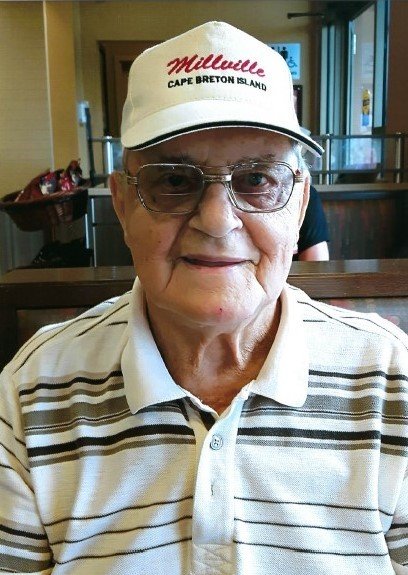 Peacefully, while surrounded by his family, the Lord called unto Himself, Wilfred O’Toole in his 92nd year on March 17, 2020. Wilfred was born in Millville, Cape Breton, NS to Dollie and Timothy O’Toole. Beloved husband of Mary for 64 years and together they raised four children. Wilfred was dearly loved and will be forever remembered by his children Diane, Verna (Todd), Bryan (Bernie), and Gary (Laurie). He was an adored grandfather to Melissa (Mike), Jaret (Mita), Greg (Carrie), Katie (Eric), Brandy (Kristin), and Jody (Wayne), and great-grandfather to Henry and Timothy. Wilfred will be lovingly remembered by brothers and sisters: John (late Josephine) Dolena (late Lloyd), Bill (late Judy), Bunny (late Johnny), Marjorie (late Paddy) and many nieces and nephews. Wilfred was predeceased by brothers Gord (Mary) and Roddy and sisters Jean (George) and Ida (John). A retired employee of Dofasco after 40 years, Wilfred was a long-time supporter of the Old-Tyme Fiddle Club, where he loved dancing and listening to jamborees. He also enjoyed spending time with his family and was there for every birthday party, hockey game, and graduation. He loved meeting regularly with his friends at Tim Hortons. Wilfred was always the one to make us laugh and lighten our time together with a joke, his giggle, or a quick jig. The family wishes to thank friends and loved ones for their thoughtful messages and cards and for sharing your memories of Wilfred with us. Due to the current healthcare situation, a private family funeral has taken place. Messages of sympathy for the family can be made at www.donaldvbrown.ca If chosen, donations may be made to the Heart & Stroke Foundation of Canada, Canadian Cancer Society or Diabetes Canada. Thank you also to the healthcare team at Hamilton General Hospital.

Share Your Memory of
Wilfred
Upload Your Memory View All Memories
Be the first to upload a memory!
Share A Memory
Plant a Tree